First off, I’ve prettied up the place! What do y’all think? I found these backgrounds through another person’s blog and loved them. Took trying out about four of them before I settled on this one. If you click the little button at the top left, you can check out all the other cool options.

I am so excited. Even got a few hundred past it before I noticed. I’ve never written this much and I know I’m going to be overwhelmed when it comes time to make this thing presentable, but I’m riding the high right now. If I didn’t believe in momentum before, I sure as hell do now. LOL!

So, that’s it. I could tell you about kiddo’s volleyball season or all the extra duties I’m about to inherit at work, but I’ll save that for another time. Both involve anywhere from a modicum of bitching to a lot, and I want to keep this one positive.

How is everyone else doing? We still have a couple weeks of school but I know tons of kidlets are already out across the country. Anyone wanting to send them back already? Got some really cool summer camps planned? Broken out the old bathing suit yet? (So not looking forward to this.)

I said when I announced my hiatus that I’d chime in if there were any pertinent updates. Well, I think this is pertinent.

I have passed the 50K mark! For most writers, this is not a big deal. For me, it’s huge. I’ve never gotten this far in any WIP before. Which is obvious since I’ve never finished a WIP, but I’m tired and fried so I’m pointing out the obvious.

Anyway, so I’m excited and moving along and now, I’m getting very close to THE scene. That’s right, The Sex Scene. This is the ONLY sex scene I have planned and it’s more than 250 pages in. That means this better be a damn good sex scene or readers are going to hate me. Rebel. Burn the book in effigy even.

So, I’m feeling the pressure. But I can do it. I know I can. And since this is the first draft, it doesn’t have to be perfect, right? Right. Thankfully, some great ideas for making it fun have been popping into my mind for the last few days. Sex scenes are always better when there’s some laughter involved. I think so anyway.

Okay, update done. I’m on schedule, feeling good, made it through the middle without sagging (at least not for long), and we are sailing into the home stretch, people. Stay with me, stay hydrated, and we’ll all make it out of this alive.

Who’d a thunk when I agreed to this endeavor that I’d be able to claim Mother Nature got in the way of my NaNo production? Well, it’s true. In case you haven’t heard, the great November Nor’easter tore up the central east coast last week. And I just happen to live right where it landed. Lots of rain, high winds, and extreme high tides wreaked havoc on the area. And knocked out the power in my house for about 18 hours.

Now, I wish I could say this is the sole reason for being about 15K words behind. But we both know I’d be lying. So, some self-doubt mixed with a television addiction, and plain old procrastination would be the real culprits. And a persistent cold. My head feels like it wants to roll off and out the door. And I’m considering letting it go.

There will be some traveling on the agenda for the next couple of weekends, but I’ll be home alone all next week, and that includes the holiday. That means writing my little heart out and though I’ve no delusions of hitting 50K before month end, I’d really like to at least double my current number to finish the month with a minimum of 30K.

If I pull out a miracle, closer to 40K would be a dream.

How is everyone else doing? Still liking the story? Ready to throw the comp out the window? Eaten your weight in chocolate? (Raised hand!) Vent or celebrate here and we’ll all support each other.

The first week isn’t technically over until after tomorrow, but my weekend is looking busy so I’m throwing this up now. The bad news is, I’m a tad bit behind. The threat of a head cold required a night of cold medicine intake which resulted in sleeping the night away. All of it. So, one slow night and one zero night means writing like a fiend tonight and tomorrow. I’d really like to at least be caught up before week two starts.

The good news is, I’m having a blast. Turns out, being able to tell yourself you don’t have time to second guess, and meaning it, works wonders. Can’t remember a minor name you used 12 pages ago? Put [look back for name] and move on. Know that you need to add some info to the first two scenes to make the motivations clear? Make a mental note and keep those fingers going.

I’m seeing parts of the story I’ve never been able to see before. Thinking of goals and motivation without wanting to jump out a window. And looking forward to having something substantial to revise. Crazy. I also wrote the most words in one night that I’ve ever done when 2000 words flowed onto the paper last night. I’m still wondering where all those words came from.

Would love to hear how everyone’s first week is going. Is the story writing itself? Are the characters running amuck? Anyone brought in an alien abduction just to spice things up? Fellow NaNoers want to know!

Honors and E-Readers and Company, Oh My!

I interrupt the progress report nature of this blog to throw a little life update into the mix.

To mark this momentous occasion, my family is coming to visit. My ENTIRE family. None of them have ever seen my apartment. Neither of my brothers have ever even been to this city as long as I’ve lived here. My dad hasn’t been here in over four years. This is a big deal. And I’m excited, but I’m also a little trepidatious. You see, these are not the happiest people on the planet. In fact, they’re downright miserable and tend to bicker. And fight. A lot. It’s not pretty.

But I’m looking forward to having them visit (partially because I’ve rented them an apartment for the weekend – cheaper than it sounds! – and I can still sleep in my own bed.) We’re also celebrating Christmas while they’re here, since I never sent presents home last December and I want this stuff out of my storage room. Presents always reduce cranky-pants behavior, right? Anyone?

In other awesome news, one of my bosses and another co-worker went in together and bought me a Sony Reader (that’s exactly it to the left). Can you believe that? It’s the touch screen one that reads to you. Seriously! I can plug in my headphones and relax to the robotically soothing sounds of a monotone love scene. Okay, I don’t really know what it’s going to sound like, but it’s still cool. Now, to figure out a) how it works and b) where to find digital books that aren’t priced stupidly high.

To tie in some writing news with this, I’m still waiting on the feedback from the writing coach, though she did say at first glance that it looked “hilarious”. Her word. Can you believe it? Me neither. I mean, I kind of go for funny, but hilarious? That’s just cool.

I also posted my first paragraph in Nathan Bransford’s 3rd Sort-of-Annual Stupendously Ultimate First Paragraph Challenge. Coolest title for a contest ever. But then, I expect nothing less from the coolest man in the writing industry blogosphere. (I can’t believe my Word did not mark blogosphere as misspelled. It didn’t recognize trepidatious but got blogosphere?) While I’m writing this there are well over 2000 entries and still nearly five hours left to enter. I’m not holding my breath at all.

I am participating in NaNoWriMo though not in the traditional sense. I’m not about to start a book from scratch just to appease the rules over there, nor am I willing to figure out how to navigate that site. But I have made a deal with Hellion and we’ll be doing it together. She hits the 50K mark, she’ll finish the first draft. (Freaking show-off) If I hit the 50K mark, I’ll be right around the black moment and that works for me.

So there you have it, what is going on in the life of aspiring-writer, slacker-extraordinaire Terri Osburn. If you think this is boring, you should have read the original post that included my new matching coffee table and end tables, and the exploits of my cat who in less than 24 hours managed to crawl inside my fridge and to the highest point in my closet, which is nearly seven feet off the ground. No idea how he accomplished either feat. 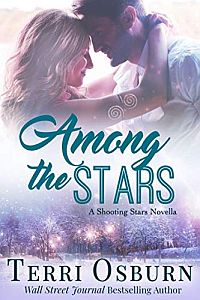