I’m kicking off the last week at my day job, and my emotions are all over the place. I’m happy I’ll have more time to write and focus on the books, but I’m also scared to death. I’ve been with this company for seven and a half years, which is longer than I’ve ever stayed in the same job in my life. (I’m a bit of a nomad.) These people aren’t just co-workers, but friends. Not seeing them every weekday is going to be weird.

But, I make a conscious effort in my life to remain positive at all times, and this is definitely the time to turn that up a notch. Though this week is going to be bittersweet, I need to do this. I need to put all of my focus and energy into this writing career and do it right. I can’t do that if I have two full time jobs.

I’ve had the privileged once before in my life to spend my days doing something I truly loved. And after six and a half years as a disc jockey on country radio, I rode off into the sunset playing this song. Seems fitting to play it for yet another big change in my life.

I Can’t Believe It

It’s over. I think I’m a little dazed and going into shock. Three and a half years of my life have been dedicated to obtaining my Bachelors degree. I’ve taken my last final, turned in all the reports and papers, and I’m done. *blinks* It’s really over. I mean, I knew it would end someday, but it still feels unreal.

In December of 2005, I had a new apartment I couldn’t afford, a temporary job that didn’t pay the bills, and a truck out for repossession. I had no presents for Christmas and no idea where I’d get the money to make the two trips I was required to make from Virginia to Tennessee. With everything falling apart, I somehow made the decision to go back to college. I decided to sign up for online classes when I didn’t even own a computer.

The difference from then until now is astronomical. A change in mindset, in lifestyle, in circumstances. A change in direction, in friendships, in goals. I feel accomplished and lucky, liberated and rejuvenated, happy and perplexed. What do I do now? Luckily, I have an answer. I’m going to write a book. Hopefully, it won’t take three and a half years.

I think this is the first time in my life I’ve felt like I accomplished something real. Okay, it’s not exactly the same as giving birth, but that feels more like a biological magic trick for which I was just along for the ride. Either way, I have my greatest treasure to thank for both. She made both experiences better for having played a part. 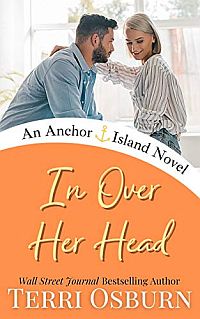 Terri Osburn is giving away a signed copy of IN OVER HER HEAD, the latest addition to the bestselling Anchor Island series.