Other Books in The Not Series Series

Four blind dates in five days. I can’t believe I agreed to this.

Actually, I can. That’s what I do. I agree to things I don’t want to do to make other people happy. In this case, my four best friends. They’re worried about me and if going on a few dates will make them happy, then I’ll do it. How bad could they be?

I probably shouldn’t have asked that.

I’m starting to seriously wonder if my friends know me at all. None of these men are my type. And none of them compare to my former fiancé. But then I guess maybe that’s the point. Someone new to help me forget the old.

To help me move on.

What they don’t understand is that there is no moving on. I found my soulmate. My other half. That doesn’t come around a second time no matter how many dates I go on. It’s crazy that my friends can’t understand this, but the stranger who keeps saving me from all these blind dates totally gets it.

There’s one more date left and I can’t help but wonder if he’ll pop up again. How many chance encounters can two people have? Pittsburgh is a big city so the chances are slim.

A snippet from Chapter 1 of Not You Again…

“I don’t normally drink on a weeknight,” Peter said, drawing my attention. When I looked up, he added, “I’m not going to get drunk or anything. It’s just been a week.”

I agreed. And it was only Tuesday.

Forty minutes later, Peter-the-Broker made a liar out of himself, for he was well and thoroughly drunk. Possibly closer to shit faced, as Aunt Jeanne called it when Uncle Reginald had enough Iron City beers to piss his own pants. Hopefully, this date would not include Peter wetting himself.

I’d assumed we would go Dutch on the meal, but by the time the check came my heartbroken date could hardly sit upright, let alone whip out a credit card, so I paid in full. Josie would be getting a bill for his half.

He’d ordered two more dirty martinis and barely touched his food. Partly because he’d been too busy talking about Evelyn. Apparently, the month before her infidelity had come to light, they’d shopped around for an apartment to share and Peter had put a down payment on a sizable ring. He’d even showed me a picture of it from his phone. The man had excellent taste, and in my line of work, I’d seen every ring out there.

To make matters worse, the cheating had been revealed through an email between coworkers that he’d been mistakenly cc’d on. The more I learned the more I had to agree that this poor man absolutely had grounds for tying one on. I’d have preferred he not do so while on a date with me, but who was I to judge? I’d swallowed my fair share of alcohol two years ago when my heart got broken.

Once the check was paid, Albert helped me get him outside where I then had to figure out how to get him home.

“I need you to focus,” I pleaded, cupping Peter’s face in my hands. “Where is your car?”

Seeing as I didn’t own a car, I’d arrived via Uber, which was how I got pretty much everywhere.

In response to my question, my inebriated date shrugged. “In the garage where I always park.”

My sympathies went only so far and he was pushing the limit.

“Where would that be?”

“By the office,” he replied, showering me with gin scented spit.

Turning his face away while wiping my cheek, I pictured that part of town. Josie’s office was on Fourth Avenue, one block over from where we stood. Disliking downtown did not mean I wasn’t familiar with my surroundings. I’d lived here all my life, after all. Closing my eyes, I mapped the parking garages in my mind and came up with no less than four in either direction of his office.

“Think,” I pleaded, tugging on Peter’s lapel. “Which garage?”

“The one with all the cars.”

Okay. Time for plan B. Pulling up the app on my phone, I asked, “What’s your address?”

“No,” I assured him. “Since you’re in no condition to drive, we’ll have to order a car.”

I’d handled enough drunk wedding guests over the years to have a degree in this sort of thing, but in those cases said guests were always someone else’s problem. This one was mine alone, and I was quickly running out of patience.

After a deep breath, I tried again. “Can you tell me the name of the parking garage?”

With narrowed eyes he said, “First.”

Now we were getting somewhere. “The First Avenue garage?”

“The first one,” he corrected. “By the office.”

Lucky for him that I was not a violent person.

“Let’s go back to your address. I need to know what to put in my GPS so I can drive you home,” I lied. “Where do you live?”

“South Side,” he replied, proving that he had not lived here all of his life, because the th sound of south was clearly pronounced. A native would say Souside.

“Where, exactly?” I pressed.

Glasses perched on the end of his nose, he attempted to focus on my face. “Sidney Street. Twenty-nine Fifteen Sidney Street.”

Finally. I entered the address into my phone and the first option—a car two blocks away—popped up. “We’re all set,” I said, confirming the ride with a quick touch of the screen. “Jacob to the rescue.”

“You’ll have to get your car tomorrow.” Following the instructions on the phone, I took Peter’s hand. “He’s going to pick us up down this way.”

To my surprise, my date spun me in a circle and said, “You aren’t as pretty as Evelyn, but I like you.”

The move threw us both off balance, sending me toppling into a passing couple and Peter onto his butt on the sidewalk. A pigeon squawked in protest before whooshing past my head, and after a sincere apology to the passersby, I attempted to lift my dance partner to his feet. For a man who looked as if he’d need to run around in the shower to get wet, he was quite heavy.

During the struggle, a white Buick pulled up to the curb. The passenger window slid down and a voice said, “Meredith?”

My mother had blessed me with the name Meredith, after her own mother, but to avoid confusion, the family had used my middle name Rebecca. That had been shortened to Becca by middle school, but anything that involved using a credit card meant using my first name.

“Yes, that’s me,” I replied. “Are you Jacob?” Normally, I would check the license plate to make sure I was climbing into the correct vehicle, but none of this was normal.

“I am.” The window went back up. Unfortunately, Peter was still on the ground.

“You have to stand up.” I tried lifting him from behind with no luck, then I switched to pulling from the front but he still didn’t budge. At five foot two and barely one hundred pounds, I’d never been much of a power lifter. “Come on, Peter. Help me out here.”

As the challenge continued, the passenger window slid down again. “Are you getting in?”

Frustrated, I shoved the hair that had now fallen out of my bun back behind my ear.

“I can’t get him up.” That sounded far less dirty in my head.

Dark brows arched my way as an awkward silence passed. I feared he might drive off, but instead, he opened his door and climbed out. I hadn’t been able to see him well inside the car, but when he joined me on the sidewalk, my breath caught. At well over six feet, the man carried himself like one of those action heroes who never gets rattled.

The ones who have all the best lines, carried the perfect amount of scruff along their chiseled jawline, and morphed into a total badass when necessary. He also looked as if he’d walked right out of one of the Asian dramas I’d devoured in the last two years. The cheekbones alone could make a girl swoon.

“Time to get up, buddy.” Jacob-the-Driver lifted Peter-the-Broker as if he weighed no more than a sack of groceries. Before I could recover, my date was safely in the back seat. “Your turn,” the driver said, glancing my way.

I emitted some sort of giggle slash snort combination before shuffling in beside Peter, trying not to suffocate on my embarrassment.

Jacob closed the door and seconds later was back in the driver’s seat. The local rock station played on the radio, volume just high enough to prevent total silence, as the Buick cut through the early evening traffic with ease. Suddenly exhausted, I closed my eyes and thought about all the ways I was going to make Josie pay for this. Covering Peter’s half of dinner would be only the beginning. 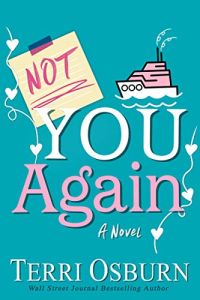